In early 2010, ducks began to disappear in northern Nigeria. People would later report that they noticed there were fewer ducks in the area, but no one thought it was important at the time. 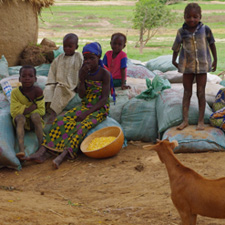 However, a few months later in May 2010, public health officials learned that hundreds of children had become sick in northern Nigeria. Reports stated that the children suffered from vomiting, abdominal pain, headaches, and seizures. After becoming ill, many of these children had died. The cause was unknown, and such a large number of childhood deaths and illnesses concerned public health officials.

A team was sent to one of the villages to find out the cause of the children’s deaths. Team members came from the CDC-Nigeria office in Abuja, the Nigerian Federal Ministry of Health, the Nigerian Field Epidemiology and Laboratory Training Program, the World Health Organization, and Medecins Sans Frontieres (Doctors Without Borders). Dr. Lora Davis, a CDC Animal-Human Interface Officer in Nigeria, was one member of the team.